In the last few months, hardly a day has gone by without some news regarding transgender bathroom access.  Perhaps the catalyst for the increased attention on this issue was North Carolina’s passage of its controversial H.B. 2 law which, among other things, restricts transgender people’s access to public restrooms and blocks local governments from passing 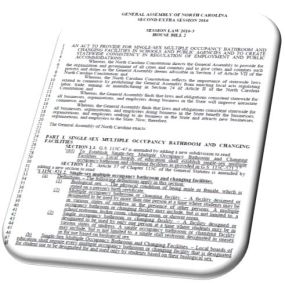 Notably, the American Civil Liberties Union (“ACLU”) has since filed a lawsuit in federal court challenging that law, and seeking an injunction preventing the State from enforcing it.  On May 4, 2016, the U.S. Department of Justice sent a letter to North Carolina Governor Pat McCrory saying the state’s controversial law restricting bathroom access for transgender persons is in violation of federal civil rights laws prohibiting employment discrimination.

The ACLU has also successfully challenged other entities that it believed were infringing on transgender rights.  For example, the U.S. Court of Appeals for the Fourth Circuit recently sided with the ACLU and ruled that a transgender high school student who was born as a female but was barred from using the boys’ bathroom can sue his school board for discrimination.  In that case, the Fourth Circuit accepted the federal government’s interpretation of discrimination as including discrimination against transgender individuals and thus deferred to the U.S. Education Department’s position that transgender students should have access to the bathrooms that match their gender identities, rather than being forced to use bathrooms that match their biological sex. 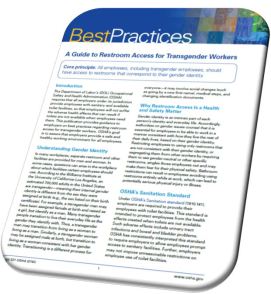 As a byproduct of the increasing visibility of this issue, both the U.S. Equal Employment Opportunity Commission (“EEOC”) and Occupational Safety and Health Administration (“OSHA”) have strongly supported transgender rights.  Indeed, last year, OSHA promulgated its “Transgender Restroom Access Guide” with the core Principle that all employees, including transgender employees, should have access to restrooms that correspond to their gender identity.  OSHA linked this to safety and health by reasoning that:

“Restricting employees to using only restrooms thatare not consistent with their gender identity, orsegregating them from other workers by requiringthem to use gender-neutral or other specific restrooms, singles those employees out and maymake them fear for their physical safety. Bathroomrestrictions can result in employees avoiding using restrooms entirely while at work, which can lead topotentially serious physical injury or illness.”

If ready access to a restroom that employees are comfortable using is not available, that could be, OSHA suggests, a violation of OSHA’s Sanitation Standard (29 C.F.R. 1910.141), which requires employers to provide their employees with prompt access to toilet facilities or impose unreasonable restrictions on employee use of toilet facilities.  This standard is intended to eliminate the health effects created when toilets are not available (e.g., urinary tract infections and bowel and bladder problems).

The EEOC likewise consistently sets forth its belief, as it laid out in its 2013-2016 strategic enforcement plan, that Title VII’s protections against gender bias extend to gender identity and sexual orientation (which includes treating employees differently for failing to conform to sexual stereotypes, such as self-image, appearance, behavior or expression), and that gender-based stereotypes, perceptions or comfort level must not interfere with the ability of any employee to work free from discrimination, including harassment.

In case there was any doubt as to the EEOC’s position, the agency recently issued a fact sheet reminding employers that discrimination based on a person’s transgender status is sex discrimination under Title VII,

and that denial of equal access to a bathroom corresponding to the employee’s gender identity qualifies as sex discrimination.  Importantly, the EEOC also has explicitly stated that under Title VII, an employer cannot rely on contrary state laws as a defense.

Based on this pointed guidance from both OSHA and the EEOC, and the fact that federal law prohibits discrimination on the basis of sex and gender, employers should make sure they provide transgender workers and guests (for those employers who are also places of public accommodation) access to a bathroom that corresponds to their gender identity or risk running afoul of Title VII.  Employers should also review their internal policies and procedures to ensure that they encompass non-discrimination towards LGBT employees.

If an employee is in transition, your company’s Human Resources Department should be educated on how to address those issues with the employee and with the employee’s co-workers to protect their rights and privacy.

Employees and customers should be aware that individuals can use the restroom of their choice, and security and others will not restrict access to a particular restroom or remove a person from the facility for using a different bathroom.  Some employers may want to consider installing a single-use occupancy bathroom in their offices or in new developments to address this issue.  Employers also may want to consider hiring an outside consultant of other type of presenter/speaker to train employees on how to respect LGBT workers inside the office.

Most importantly, employers must be prepared to address these new and evolving questions in the workplace, in consultation with legal counsel

and the best practices provided by the federal enforcement agencies, in order to protect their company from this trending discrimination claim.