On February 1, 2017, President Trump nominated Neil Gorsuch, a judge on the U.S. Court of Appeals for the Tenth Circuit in Denver, Colorado, to fill the vacancy on the Supreme Court left by Antonin Scalia’s death in February 2016.  Indeed, since February 2016, the High Court has functioned with only eight members; four liberal Justices and four conservative Justices. 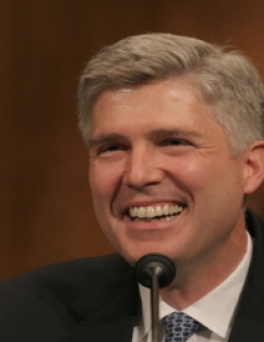 Therefore, the confirmation of a ninth Justice to fill the vacant position, and establish a majority conservative bench, is likely to have a substantial impact on the outcome of controversial issues brought before the Court.

Gorsuch was appointed to the Tenth Circuit by President George W. Bush in 2006.  Although he is considered a firm conservative, as was expected given President Trump’s public stance to fill the vacancy with a judge who embodies Scalia’s principles, he has garnered praise from both liberals and conservatives for his work as an appellate judge due to his reputation for conveying his ideas fluently and courteously.

A number of Democrats have already conveyed their opposition to Gorsuch’s nomination, which could prove problematic as he will need to win over some Democratic senators to get the 60 votes needed to clear procedural hurdles.However, setting the political climate aside, when Judge Gorsuch was appointed to the Tenth Circuit in 2006, he was confirmed by the Senatewithout objection.  Only time will tell if Judge Gorsuch will acquire enough support from Senate Democrats to overcome a filibuster given the immediate public opposition from Democrats following Gorsuch’s nomination, and whether he will be approved in time to hear oral arguments later this spring.  Judge Gorsuch’s opinions on labor and employment topics suggest that he favors businesses, and his decisions reflect a distaste for overreaching agency action which could result in some limiting decisions if he is ultimately confirmed.

Who is Judge Gorsuch?

Prior to being appointed to the Tenth Circuit, Judge Gorsuch amassed an impressive resume.  He received his undergraduate degree from Columbia University in New York City in 1988 and his law degree from Harvard Law School, with honors, in 1991 where he was the editor of the Harvard Journal of Law & Public Policy and classmates with former President Obama. Judge Gorsuch also earned a doctorate of legal philosophy from Oxford University in 2004, where he studied as a Marshall Scholar.  Judge Gorsuch began his law career as a

law clerk for Judge David B. Sentelle on the U.S. Court of Appeals for the D.C. Circuit, and later clerked for Supreme Court Justices Byron R. White and Anthony M. Kennedy during the 1993-1994 Supreme Court term.

Judge Gorsuch worked in private practice for roughly 10 years with the law firm of Kellogg, Huber, Hansen, Todd, Evans & Figel after completing his clerkships, where he primarily focused on complex litigation. In 2005, he left private practice to accept a position as the Principal Deputy Associate Director at the Department of Justice.

However, his career in the Department of Justice was short-lived as he was appointed by President George W. Bush to the Tenth Circuit in May 2006.  Since May 2006, Judge Gorsuch has written a slew of opinions and dissents that provide some insight into what type of Supreme Court Justice he may be, specifically as the positions we could foresee him taking on issues of labor and employment, as well as administrative agency action.

Judge Gorsuch would likely be a welcome addition to the nation’s highest court by employers.  As a federal appellate judge, Gorsuch has criticized courts for giving too much power to government agencies that enforce the nation’s labor and employment laws.  As a lawyer in private practice, he also defended cases seeking to restrict class-action lawsuits – a topic that the Supreme Court has heard multiple cases on in recent years.

A review of his most recent labor and employment cases sheds further light on his pro-business stance and skepticism of overreaching agency action.

For example, in Walton v. Powell, an April 2016 decision involving a retaliation claim, Judge Gorsuch criticized the McDonnell Douglas framework used to evaluate cases where a plaintiff is only capable of presenting circumstantial evidence of discrimination.  He highlighted that it had never been used to evaluate a First Amendment retaliation case, and further questioned and criticized its application in Title VII cases.

He has even sided with the National Labor Relations Board (“NLRB”), one of several administrative agencies he has criticized for overstepping its boundaries, in dismissing claims by employee unions.  For example, in Teamsters Local Union No. 455 v. NLRB, Judge Gorsuch ruled in favor of the NLRB by rejecting the Teamsters’ claim that a lockout was unlawful because the employer made and then retreated from a threat to hire permanent replacements.  Judge Gorsuch supported the NLRB’s decision to limit its ruling to finding that the threat was unlawful, and held that the Board’s determination not to order additional remedial measures was not improper.

The Supreme Court will likely hear several important labor and employment cases, including in this upcoming term.  For example, the Court is scheduled to hear oral arguments in March in a case related to transgender rights.  Specifically, the Court will hear an appeal from the Fourth Circuit which ruled that the Gloucester County school board’s policy requiring students to use the bathroom aligned with their biological sex constitutes sex discrimination.

While this appeal directly implicates Title IX, the ruling would almost certainly impact federal courts’ interpretations of prohibitions on sex discrimination under Title VII based on gender identity and sexual orientation.   Employers should pay particular attention to the outcome of this case given its potential to expand the protections of Title VII to LGBT individuals.

As detailed in a prior blog article on Conn Maciel Carey’s Employer Defense Report blog, the Supreme Court will also decide whether companies can require workers to sign away their right to pursue class-action lawsuits.  The current NLRB takes the position that such waiver agreements violate the rights of workers who want to sue over wage disputes and other workplace disputed.  Recently, the Court announced that it would hear this issue during its 2017 term, which begins in October 2016.  This makes it even more likely that, if Judge Gorsuch’s nomination proceeds through the Senate, he will have been confirmed to the Court by that time.

Labor union critics also hope the Court will revisit Friedrichs v. California Teachers Association et al. – a case that threatened to cripple the ability of public-sector unions to collect fees from workers who chose not to join and did not want to pay for the unions’ collective bargaining activities. The Court split 4-4 on the issue after Justice Scalia’s death, which ultimately gave the unions a temporary victory, but left the door open for a challenge in the future.

Judge Gorsuch has been a staunch opponent of the power wielded by administrative agencies, including both the NLRB and OSHA.  He believes that statutory interpretation should be left to the courts – not administrative agencies – and that agencies should not be able to bend clear statutory directives by promulgating rules through litigation and rulemaking.  Most notably, Gorsuch’s opposition to the Court’s use of Chevron deference – which says that courts should defer to an agency’s own views of an ambiguous law – could have a significant impact on administrative law if he is ultimately appointed to the Supreme Court.

A review of his recent opinions exemplifies how much Judge Gorsuch disapproves of overreaching administrative action.

In TransAm Trucking, Inc. v. DOL Administrative Review Board, Judge Gorsuch dissented from two of his colleagues, who found that TransAm Trucking violated whistleblower provisions of the Surface Transportation Assistance Act (STAA) by terminating an employee who left his cargo after being told to continue working in unsafe conditions.  Judge Gorsuch’s dissent criticized the majority opinion for giving the Department of Labor (“DOL”) deference in interpreting allegedly ambiguous provisions in the STAA – noting that it is the Court’s job to “apply the law Congress did pass, not to imagine and enforce one it might have but didn’t.”

Gorsuch also dissented in a 2011 OSHA case, Compass Environmental, Inc. v. Occupational Safety & Health Review Commission, in which DOL officials wanted to fine an excavating company for violating federal standards after one of its workers died in a Colorado electrocution accident.  The federal appeals court upheld the $5,500 penalty, but Gorsuch dissented that the Occupational Safety and Health Review Commission did not interpret the rules correctly, and indicated that he would vote to overturn the Commission’s finding that the employer improperly trained the employee.  In justifying his position that he would have granted the employer’s petition for review, Judge Gorusch noted that “there remains one thing administrative agencies cannot do.  Even they cannot penalize private persons and companies without some evidence the law has been violated.”

He even went on to admonish OSHA, and other executive agencies, stating that “[t]heir interpretations of ambiguous statutes control even when most everyone thinks Congress meant something else.  Their regulation binds as long as they can make the modest boast that they haven’t behaved arbitrarily.”

More recently, in Gutierrez-Brizuela v. Lynch, an immigration case, Judge Gorsuch wrote a separate concurring opinion in addition to his majority opinion, highlighting his distaste for the Chevron doctrine.  In his concurrence, Judge Gorsuch purported that the Chevron doctrine is unconstitutional, that it should be eliminated, and courts should have de novo review of administrative actions.  Specifically, he claimed that de novo review of agency action could eliminate the dilemma that arises when employers reconfigure their organization without any assurance that “the rug will not be pulled from under them tomorrow.”

Ultimately, as to labor and employment cases that come before the Supreme Court, employers will likely benefit from Judge Gorsuch’s confirmation if it should proceed.  His ideals comport with President Trump’s small government / anti-regulation agenda, and it seems likely that he would be highly critical of agency action throughout his tenure on the bench.