Last week, on the day of a federal district court-mandated deadline — Wednesday, February 5, 2020 — the Chemical Safety and Hazard Investigation Board (the CSB) announced its Final Rule on Accidental Release Reporting. The CSB posted a prepublication version of the Final Rule last week, on February 5th.  The official version should be published in the Federal Register within the next few days.

As we previously reported, on December 12, 2019, the CSB issued a Notice of Proposed Rulemaking for its new reporting rule, which set out the circumstances when facility owners and operators are required to file reports with the CSB about certain accidental chemical releases and what must be communicated in the reports.

The rule requires owners and operators of stationary sources to report accidental releases that result in a fatality, a serious injury, or substantial property damage to the CSB within eight hours.  The specific information required to be provided in the accidental release report includes:

Issuance of the CSB’s reporting rule has been a long time coming.  Although the CSB did not become operational until 1998, its enabling legislation – the Clean Air Act Amendments – was enacted in 1990.  That statute, from nearly thirty years ago, expressly required the agency to issue a rule governing the reporting of accidental releases to the CSB.  Although the CSB submitted an Advanced Notice of Proposed Rulemaking for Chemical Release Reporting in 2009, that effort died on the vine.  Accordingly, the CSB has never had its own reporting rule, relying instead on other sources to receive incident information.  In February 2019, however, END_OF_DOCUMENT_TOKEN_TO_BE_REPLACED

Last week, the CSB issued a Notice of Proposed Rulemaking for its accidental release reporting rule, which establishes the criteria for when facility owners and operators are required to report to CSB accidental chemical release incidents and what must be included in those reports.  Here is a link to an article we posted that summarizes the CSB’s proposal

and background about the situation. If promulgated, the rule would require owners and operators of stationary sources to report to the CSB within four hours any accidental chemical releases that results in a:

A release reporting rule was mandated by the CSB’s enabling statute (decades ago), but the Agency had never issued such a rule. In February of this year, however, a federal court ordered the CSB to promulgate a final reporting rule within 12 months of the  court’s ruling—by mid-February 2020.  With CSB waiting until the 11th hour to publish this NPRM, interested stakeholders have only a very small window to make sure their concerns about the proposed rule are heard.  Comments are due to the CSB by January 13, 2020, and because the deadline to promulgate the rule is court-mandated, there likely will be no extension of the comment period.

Although the proposal indicated that CSB contemplated some of the duplicative effort that a separate CSB reporting rule would require, the proposed rule does not come close to addressing employers’ legitimate concerns 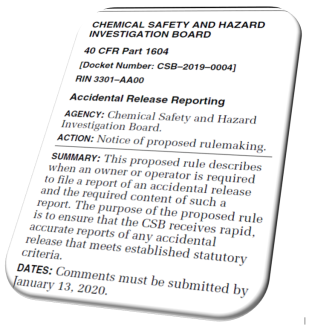 about the burden this reporting requirement will place on employers at a time when their attention should be focused on emergency response. To compound the problem, the scope of reportable incidents and criteria for reportability aligns neither with CSB’s investigative jurisdiction nor with other agencies’ already-existing reporting requirements, and, as formulated, could create disincentives for robust internal reporting of incidents.

Conn Maciel Carey’s national OSHA • Workplace Safety Practice Group is coordinating an ad hoc coalition of employers to prepare a set of comments to submit to the CSB. END_OF_DOCUMENT_TOKEN_TO_BE_REPLACED

Earlier this week, on December 12, 2019, the U.S. Chemical Safety and Hazard Investigation Board (CSB) issued a Notice of Proposed Rulemaking (NPRM) for its long-awaiting chemical incident reporting rule, which sets out the circumstances when facility owners and operators are required to file reports with the CSB of accidental chemical releases and what must be communicated in the reports.

If promulgated, the rule would require owners and operators of stationary sources (chemical facilities) to report  accidental releases that result in a fatality, serious injury, or substantial property damage to the CSB within four hours.  The proposed rule also identifies the specific information required to be included in the accidental release report:

Importantly, recognizing that some or all of this information may not be known within four hours of an accidental release, the CSB decided to  include the qualifier — “if known” — for much of the information that would be required in the report.

If, however, the owner/operator submits a report to END_OF_DOCUMENT_TOKEN_TO_BE_REPLACED

What is the Process Safety Summit in Washington, DC?

The Process Safety Summit in Washington, DC is an annual event in our nation’s Capital.  The Inaugural Summit last Fall welcomed more than 175 safety and legal professionals from stakeholders in the chemical, petrochemical, paper, and petroleum refining industries and other industries with operations covered by OSHA’s PSM Standard and EPA’s RMP Rule. The Summit focuses on the process safety regulatory landscape and industry best practices, with programming that covers rulemaking, enforcement programs, significant cases, trends as we move through the Trump Administration, best practices, and other key process safety regulatory issues impacting Industry.

The Agenda and format for the 2nd Annual Process Safety Summit in Washington, DC will include one-of-a-kind line-up of speakers and panels of senior government officials and industry experts, as well as moderated round table sessions.  The event is broken into two parts:

By the national OSHA Practice at Conn Maciel Carey LLP

The Inaugural Process Safety Summit in Washington, DC on October 23, 2018 was a huge success.  The event allowed more than 160 safety and legal representatives from the petroleum refining, chemical manufacturing, paper manufacturing, and fertilizer industries to hear from and share with senior federal government officials from OSHA, EPA and the Chemical Safety Board, both through interactive panel discussions and breakout discussions.  The agency panels and facilitated discussions covered topics ranging from enforcement under the Trump Administration, to the status of OSHA’s PSM and RMP Rulemakings, candid debates about major issues in dispute in recent PSM and RMP cases, and practical discussions about how to prepare for the next round of inspections under OSHA’s new PSM National Emphasis Program and comply with RMP in the wake of the new Amendments and the imminent Rescission Rule.

Too often, OSHA and EPA representatives complain that Industry “can make up the rules as it goes along.” – Tweet from a former Senior OSHA Official.

Statements like that imply a haphazard approach to process safety that it is not reflected by the diligent work of refiners and manufacturers across the country.  Our experience shows a much different take on process safety.  We hear about all of the ways that process safety is evolving, we watch how lessons are being learned and applied from incidents and experience, and we see how much time is spent anticipating the kinds of issues that could cause a process safety incident.  More importantly, remarks about Industry “making up the rules as it goes along” also reflect a flawed view that END_OF_DOCUMENT_TOKEN_TO_BE_REPLACED

Attend the Inaugural Process Safety Summit in Washington, DC on October 22-23, 2018, presented by Conn Maciel Carey LLP and sponsored by the American Fuel and Petrochemical Manufacturers (AFPM) and the American Petroleum Institute (API).

What is the Process Safety Summit in Washington, DC?

The Process Safety Summit in Washington, DC will be an annual event featuring a full-day program in Washington, DC gathering interested stakeholders from the chemical, petrochemical, and petroleum refining industries, and other industries with operations impacted by OSHA’s PSM Standard and EPA’s RMP Rule.

This Process Safety Summit fills an important gap in Washington, DC.  Although there are opportunities for trade groups and employers to interact with key government regulators, none of those opportunities focus on process safety, and the process safety-oriented events that do exist are far from Washington, DC, making it hard to attract more than one senior agency official.

The format and agenda will include END_OF_DOCUMENT_TOKEN_TO_BE_REPLACED

Conn Maciel Carey LLP, a boutique law firm with national practices in workplace safety (OSHA and MSHA), labor & employment, and litigation, is pleased to announce that Beeta B. Lashkari has joined the firm as an attorney in its Washington, D.C. office. 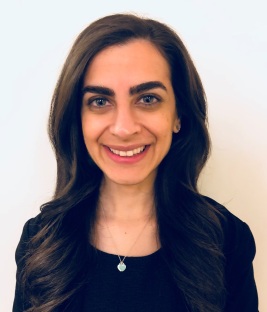 Ms. Lashkari, a former attorney-investigator at the U.S. Chemical Safety and Hazard Investigation Board (CSB), will advise and represent clients in a wide-range of inspections, investigations, and enforcement actions, including those from the U.S. Occupational Safety and Health Administration (OSHA), the U.S. Environmental Protection Agency, the CSB, and state and local regulators. As one of only four attorney-investigators at the CSB, Ms. Lashkari was involved in several major investigations of chemical accidents.

“Beeta brings a unique array of experience and perspective that will enhance the safety and health law services we provide to employers across all industries, and particularly chemical and petrochemical manufacturers,” said Eric J. Conn, Chair of the firm’s national OSHA practice. “We’ve been busy this year expanding our firm, and Beeta is another superb addition to our already deep bench of OSH law experts.”

The Trump Administration submitted a blueprint budget for 2018 to Congress proposing $2.5 Billion in cuts to the U.S. Department of Labor’s (“DOL”) operating budget.  The President’s proposed budget expressly calls for reduced funding for grant programs, job training programs for seniors and disadvantaged youth, and support for international labor efforts.  It also proposes to entirely defund and eliminate the U.S. Chemical Safety and Hazard Investigation Board (“CSB”) – an independent, federal, non-enforcement agency that investigates chemical accidents at fixed facilities.  The budget plan also purports to shift more funding responsibility to the states with labor related programs.

Finally, although less explicit, the budget blueprint appears to deliver on promises from Trump’s campaign trail that rulemaking and regulatory enforcement efforts under the myriad laws and regulations enforced by the sub-agencies, such as the Wage and Hour Division and OSHA would be slashed.

These proposed budget cuts at DOL and other agencies are all part of a plan to offset the White House’s intent to increase defense and security spending by $54 billion.  Overall, Trump requested $1.065 Trillion in total discretionary spending, with $603 billion going to Defense.

The proposal would shrink DOL’s budget to $9.6 Billion – down 21% from the $12.2 Billion budget for 2017. Trump’s planned reductions announced on March 16, 2017 – while not really surprising in the context of his view toward federal spending on non-defense agencies – would have a seismic impact on DOL’s ability to carry out both policy initiatives under former President Obama as well as many of the Department’s longstanding programs.

The business community welcomes Trump’s effort to rein in what has been viewed as an intrusive, enforcement-heavy Labor Department, but we caution not to count chickens yet. These proposed cuts will undergo heavy scrutiny by Congress before any budget is finalized. The President’s spending plan is only the first step in months of negotiations between the White House and both houses (and parties) in Congress. Pres. Trump will put forward a more detailed spending proposal in May, and various legislative committees will scrutinize his requests, calling on Cabinet Secretaries, Agency Heads, and others in the Administration to testify about or otherwise explain their spending needs and requests.

While the administration provided estimates for some of the proposed cuts, it did not specify where the majority of the budget cuts would come from.  What we do know is that the proposed budget would END_OF_DOCUMENT_TOKEN_TO_BE_REPLACED