On January 7, 2021, President-elect Joe Biden announced his much-awaited choice for nominee to serve as Secretary of Labor, selecting Boston Mayor Marty Walsh.  Mayor Walsh made his mark as a labor leader, ultimately heading the Building and Construction Trades Council from 2011 to 2013.   Mr. Walsh was also a full-time legislator, serving in the Massachusetts state legislature for some 17 years before being elected mayor in 2014. 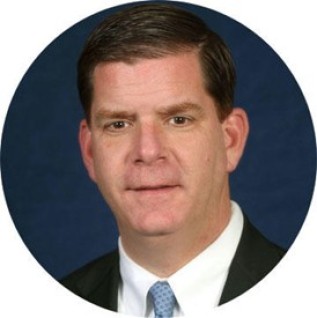 If confirmed, it is expected that Mayor Walsh’s close personal friendship with President-elect Biden will elevate the importance of the Labor Department in President Biden’s cabinet, allowing a Secretary Walsh significant influence in the Administration.

Mayor Walsh’s strong ties to organized labor and his selection follows through on President-elect Biden’s campaign promise to give unions a stronger voice in labor policy in his Administration. Mayor Walsh has a reputation as a “pragmatic deal maker,” and he is respected in Massachusetts by both business and labor for his reasonable approach to solving labor and employment issues facing the state.

Of the many issues likely to be tackled by the Labor Department over the next few years, one of the first and most impactful will be the likely issuance of a federal COVID-19 Emergency Temporary Standard by OSHA.  President-elect Biden has pledged to have OSHA quickly address this issue.  If a federal ETS is promulgated, it would replace the current Administration’s approach, which has relied heavily on CDC and agency guidance, as well as existing OSHA standards, like the respiratory protection standard and recordkeeping rules, to issue citations.  With respect to COVID-19, under Mayor Walsh’s leadership, the City of Boston implemented a END_OF_DOCUMENT_TOKEN_TO_BE_REPLACED

On March 20, 2018, Kate McMahon and Amanda Strainis-Walker, of the national OSHA Practice Group at Conn Maciel Carey, presented a webinar: “Who is the New DOL Leadership Team Impacting OSH Law?”

Pres. Obama’s Secretary of Labor, Assistant Secretary of Labor for OSHA, and the rest of his political Leadership Team at the Department of Labor turned over the keys to the Trump Administration.  The Trump Administration has now installed, or at least announced, its own OSHA and OSHRC Leadership Team, and the backgrounds and regulatory philosophies between the outgoing and new decision makers and policymakers could not be more different.

During this webinar, participants learned about the new appointees who have taken (or should soon take) the reins at OSHA, and how this new Leadership Team will affect OSHA enforcement and rulemaking.  We also reviewed other personnel changes at OSHA and OSHRC that will impact the regulatory landscape for employers.

Click here to register to view and listen to a recording of the webinar. END_OF_DOCUMENT_TOKEN_TO_BE_REPLACED

By Lindsay A. Disalvo

On Thursday, April 27, 2017, Alexander Acosta was confirmed by the United States Senate to serve as the first Secretary of Labor in the Trump Administration.

As we reported in an earlier article when Acosta was first nominated by Pres. Trump, in this role, Sec. Acosta will oversee the federal department that develops and interprets labor regulations and investigates alleged violations of minimum wage, overtime, and workplace safety laws and regulations.

The Senate approved Acosta by a vote of 60-38, meaning there was some cross-party support, despite the party-line vote on Acosta’s nomination by the Senate Health, Education, Labor and Pensions Committee.  This marks the fourth time Acosta has been confirmed by the Senate, including his prior positions in the Bush Administration.

Specifically, during the Bush Administration, Acosta served as a member of the National Labor Relations Board for approximately eight months.  In 2003, President Bush appointed him to Head the Civil Rights Division at the U.S. Department of Justice’s , a position which he held for about two years, before being appointed to serve as the United States Attorney for the Southern District of Florida.  Most recently, Acosta was the Dean of Florida International University’s School of Law.

At this point, it is still uncertain what jurisprudence Acosta will bring to the role of Secretary of Labor.  The Trump Administration and its initial Secretary of Labor nominee, Andrew Puzder, who withdrew from consideration back in February, have taken aggressive stands on deregulation.

However, Acosta’s positions on regulation and enforcement have not been as clearly expressed, and his prior experience as a prosecutor may suggest a more measured approach in managing the enforcement responsibilities of the various agencies under his direction.  We will have a better idea of Acosta’s approach soon, however, because there are a number of time sensitive issues that will need his prompt attention upon being sworn in.

In particular, we expect that one immediate priority for Acosta will be END_OF_DOCUMENT_TOKEN_TO_BE_REPLACED

By Andrew J. Sommer and Lindsay A. DiSalvo

President-elect Donald Trump has chosen Andrew Franklin “Andy” Puzder to nominate as his Secretary of Labor, according to Trump’s transition team.  Mr. Puzder is the CEO of CKE Holdings, the parent company of Hardee’s and Carl’s Jr.  He has been a vocal critic of the Obama Labor Department’s overtime regulations and efforts to increase the federal minimum wage.

As Labor Secretary, Mr. Puzder will oversee the federal apparatus that investigates violations of minimum wage, overtime and workplace safety laws and regulations.

Puzder on Wage and Hour Issues

An increase in the federal minimum wage and an expansion in overtime eligibility have been priorities for the outgoing Secretary of Labor Thomas Perez.  On Sec. Perez’s watch, the Department of Labor has issued new overtime regulations increasing the minimum salary threshold level in order to qualify an employee as exempt from overtime.  Mr. Puzder denounced this new overtime rule.  In an op-ed piece earlier this year in Forbes, Puzder said:

“[the overtime regulation] will add to the extensive regulatory maze the Obama Administration has imposed on employers, forcing many to offset increased labor expense by cutting costs elsewhere. . . .  [This cost cutting would result in reduced opportunities, bonuses, benefits and promotions.]”

The status of the new overtime rule is presently uncertain after a Texas federal court temporarily blocked the rule from taking effect.  The U.S. Court of Appeals for the Fifth Circuit has just granted the Department of Labor’s request to expedite the appeal from that preliminary injunction order, but that appeal is unlikely to be decided before Trump is inaugurated as the next president on January 20, 2017.  Accordingly, under Mr. Puzder’s leadership, the DOL could very well withdraw the pending appeal before a decision is issued by the Fifth Circuit, and otherwise not support the new overtime rule. Even if the overtime rule eventually takes effect, Puzder’s arsenal will include the authority to engage in rulemaking to roll back or modify the overtime rule, consistent with the notice and comment process under the federal Administrative Procedures Act.